Throughout the years, high integrity and an unwavering commitment to our customers have guided our growth from a small, one-man operation to a financially stable, top 25 carrier in the industry.

From a used Chevy truck in rural Virginia…

Estes’ history is the stuff of transportation industry legend. In rural Virginia during the Great Depression, W.W. Estes sought additional ways to support his family, so he bought a used Chevrolet truck with a missing windshield. Sitting on a crate and looking through an old window sash, he began hauling livestock to market for his neighbors. Pretty soon, he was also transporting farm supplies and other goods between farms, to small towns and to bigger cities. He hired his first driver in 1932, and the next year, opened an office in Chase City, Virginia. By 1937, he’d hired at least one more driver and officially named the company Estes Express Lines.

Those early days were not easy times. “When trucking was in its infancy back in the 1930s, and when they first introduced the very complicated business of regulation, you had to be determined,” says current CEO Robey Estes, W.W.’s grandson. “You worked long hours and all angles. You drove, you dispatched, you loaded.”

…to a future marked by financial stability, improved technology and a strong family-oriented culture.

The Estes family still owns and operates the company, and today, we’re the largest privately owned LTL carrier and one of the largest less-than-truckload and truckload transportation systems in the U.S.

We have an employee base more than 18,000 men and women strong, and an increasingly newer fleet of more than 7,000 tractors and nearly 29,000 primarily logistics-bar trailers. Our network has grown from a single location in one state to over hundreds of terminals with coverage in all 50 states, Canada, Mexico, Puerto Rico, and the Caribbean. And our extensive network of air, ocean and ground services through subsidiary Estes Forwarding Worldwide means we can ship to virtually any destination around the globe.

If W.W. could see Estes today, he might be amazed at how it’s grown, but he would certainly be pleased that the growth was driven by the same values of hard work and customer service that he introduced. Since that first run, creating satisfied customers and striving for excellence has always been The Estes Way.

“What I tell our customers are three things: we're a regional company with a nationwide footprint. If you have a transportation need, we have the capabilities to help you. And finally, while we are a fairly large company, we have a small company mentality. With us, you’re working with a financially strong, ethical company that stands behind their product. You can have confidence doing business with us.” – Rob Estes, President and CEO

Branch terminals in Richmond, VA, and Norfolk, VA, are opened.

Company is incorporated on November 23 as Estes Express Lines. 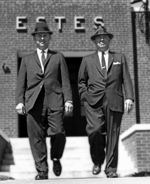 Purchase of A.C. Express and Johnson Express expands Estes’ rights in the Carolinas.

Bestway Express purchase opens up the rest of South Carolina.

Interstate partial deregulation enables the company to grow at its own rate. Operating authority extends everywhere east of the Mississippi River.

First desktop computers in both the terminals and home office.

The third generation of the Estes family to guide the company, Rob becomes president.

$200 million at year-end doubles the revenue in three years.

The company celebrates its 75th anniversary and, on August 30, mourns the loss of Robey W. Estes, Sr., who dies at age 85.

First steel/slotted Webb Walls in trailers—designed by H. Webb Estes—allow for more efficient use of load bars and straps.

Estes begins efforts to renew its fleet with 40% of tractors less than two years old by year-end.

Our interactive timeline will take you on a journey of Estes’ progress throughout the decades. Simply click the decade on the top to jump to a point in time, or select the year on the left and read about a milestone in our company’s history.